Play me lyrics and melody are one of those all time favourites from the ’70’s by singer songwriter Neil Diamond. The song is particularly favored by women, who have swooned at his concerts and cried out “Play Me, Play Me”.

Enjoy This Video of Play Me Lyrics

Lyrics are Under the Video So Sing Along, or Just Enjoy

She was morning, and I was night time
I one day woke up
To find her lying beside my bed
I softly said “Come take me”
For I’ve been lonely in need of someone
As though I’d done someone wrong somewhere
But I don’t know where, I don’t know where
Come lately

Song she sang to me
Song she brang to me
Words that rang in me,
Rhyme that sprang from me
Warmed the night, and what was right
Became me

And so it was that I came to travel
Upon a road that was thorned and narrow
Another place, another grace
Would save me

Some Interesting Facts About Play Me Lyrics and Neil Diamond

“Play Me” is a 1972 song by Neil Diamond from his album Moods. The song, the first single from Moods, was recorded in February 1972 in Los Angeles. It was released as a single in May 1972 and peaked at #11 in the United States in September of that year. It was listed by Billboard as #27 of his best 30 songs. 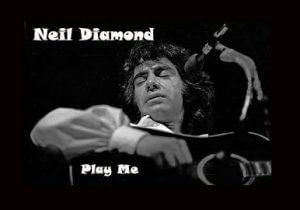 “Play Me” is a favorite, especially, it seems, among women, who carry signs that read “Neil, Play Me” to his performances and scream “me, me, me” when he plays the tune, described as “an entreaty to romance”. Along with “Love on the Rocks” and “You Don’t Bring Me Flowers”, it is one of the “baritone ballads” that have “60-year-old women erupting in girlish screams”; it makes female audience members shriek and swoon.

According to Melissa Ruggieri, writing for Media General about a 2008 concert, “Diamond [at age 67] also still possesses the ability to charm, even though he didn’t need to do much except wiggle his prominent eyebrows at women in the crowd to elicit schoolgirl-like squeals – ‘Play Me,’ in particular, had a bizarre aphrodisiac effect.”

Some have also suggested that for Neil personally, he was singing about his guitar. To him, his guitar was his companion and source of the tune and he was the source of the words.